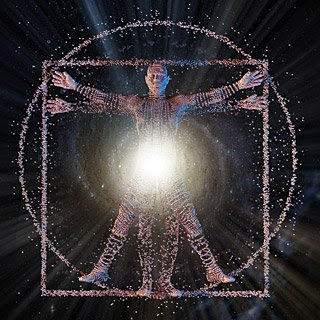 Chromoluminarism or Divisionism, carries with it some interesting implications beyond the realm of "smart-paint."


The premise is that nano-pigments are operating along the lines of the strictest definitions of pointalism, in which small distinct points of primary colors create the impression of a wide selection of secondary and intermediate colors. However, as with Shrodinger's Cat and the necessity of an "observer" to collapse the waveform, the color "mixing" phenomena cannot take place without an observer to reconcile a given chromatic arrangement -- An example of graphic art as allegory to reality emerging from disparate points, macrocosm emerging from microcosm.

In this sense, the nanopigments would become avatars of a mathematical QM consciousness in order to operate effectively within this model, and we may see how untenable a universe invoking hypertopgraphy on quantum levels might quickly become -- to quantify the vast amount of information necessary to act in knowing accordance with the universe at large. Perhaps this is the bugaboo of modern physics, the grand unified theory that Einstein spent his final years pursuing. "As above, so below" may work in esoteric teachings, but break down on the chalkboards of Princeton. While certain theories of interconnectedness indicate a gossamer thread of possibility, we'll never know the answer.

At present, everything works fine when broken down to simple, isolated components. As with Divisionism in the context of this model, the technique involves breaking color into its basic elements, painting in very small and regular dots. Simple, replete. A blue dot, for instance, doesn't know its performing "Sunday Afternoon on the Island of La Grande Jatte" -- Its simply doing "blue." Similarly, if all the electrons in our bodies knew they were enacting personhood, rather than simply going about their business, it would become quite a quantum argument. (Comparable in scale to lunch with Richard Dawkins and 10 trillion QM consciousness guys.)

So, if we live in a universe comprised of particles which presumably care not what tiny qualitative pigment of relevance they add to the bigger picture, the question arises: What if our constituent particles contained knowledge of the grand design, and worse yet, accountability for manifesting it? And what if something as stupid as "nanopaint" became a model for how it works?

If the premise is correct -- in this respect -- we can surmise the primary obstacle would be the "choreography," as Photoshop commands its army of pixels, for instance. No intercommunication required, just a higher-mind. (A benevolent dictatorship versus a cooperative collective?)


There's also the problem of the nano-revolution... when nanopaint reaches a critical mass of information about the universe they create by virtue of their own existence, and start demanding artistic freedom.

This could get messy.