We finally saw "The Secret," a new film from the makers of "What The Bleep Do We Know" about the "Intention-Manifestation" model of spooky metaphysics. Supposedly "The Secret" has been used by the most powerful people throughout history, using the laws of attraction as a visualization tool to attract unlimited abundance into their lives...

The film invites skepticism, but at the very least purveys a beautiful message -- well-rendered by the speakers and thought provoking. And I do believe that the way we view ourselves, and the world, to some extent becomes a self-fulfilling prophecy. "Whether you think you can or think you cant, either way you're right." Its metaphysics 101, and the implications go far beyond banishing depression, financial scarcity, or relationship troubles -- as anyone who's ever seriously looked into Kantian epistemology or neurolinguistic programming can tell you. The idea of language determining reality is very old and not so far fetched. It really IS metaphysical; the meaning of words, the meaning of the things we say. "In the beginning was the word, and the word was made flesh." The things that you say, if you say them enough times, they do somehow shape reality -- or they shape people's beliefs, and then people start acting according to their beliefs, and reality shifts. ( i.e. President Bush, and his signing statements. But anyway. ) Point being, how you phrase your mantras is emphasized as being somehow important. Operating under the assumption that language defines how we think, and how we think defines how we view the universe, and how we view the universe comes back to The Anthropic Principle -- Things are as they are because WE are -- which is about as subjective as you can get. And somehow that makes it all work.


However, there are different schools of thought on this. I'd want to take a post-wittgenstein look at realism and mind and try and unweave the rainbow, but I don't know enough about late modern philosophy to do so within the traditional - Cartesian - theory of mind, and I don't think anyone ever really found an adequate bridge between subject and external world, least of all a cadre of Gurdieff scholars turned filmmakers who are apparently cashing in on some kind of marriage between ontology and a post-millennial sense of entitlement within the contemporary zeitgeist...and whom, I suspect, could previously be found hosting an 'I Can Do It!' seminar at their local Holiday Inn.

Perhaps its literally the language they're using that makes them suspect -- Such as their description of the aforementioned "intention-manifestation model," which essentially states "Your goal is an effect to be achieved, and your task is to identify and then create the cause that will produce the desired effect, thereby achieving your goal." ((( gee-whiz... ))) Didn't Captain Jean Luc Picard pretty much sum that up already, when he points to the stars, and says "Make it so?"

By the end of the hour, the viewer is left with an impression halfway between a "Million Dollar Experiment" meeting and a Scientology propaganda film. Their infomercial-esque presentation fosters cynicism, and seems to indulge in a lot of pseudo-scientific posturing and "What-the-Bleep-Do-We-Know" style testimonials from guerrilla ontologists and zenhead physicists, presented in a factual documentary-style format to facilitate and encourage the purposeful messing with your brain for hopefully positive results. However, for all their erudite sophistry, they can't make that club upside the head known as "Objective Truth" go away via wishful thinking. Facts do not cease to exist because they are ignored. Anyone who tells you otherwise is indeed trying to sell you something.

However, I should qualify the above comments by stating -- at its root -- I really do believe in this stuff. And I strive to incorporate the fundamental aspects of this belief into everyday life. I think its more than just a tool to "create whatever you want." Its the power of hope. The power of our minds to manifest our realities, the context in which we frame our thoughts to actualize them through an unwavering focus on what we desire, and a steadfast faith that we can eventually realize it. To quote Anatole France, "To accomplish great things, we must not only act, but also dream; not only plan, but also believe."

My favorite line was, "If you don’t have any positive friends, then watch the movie alone to learn how to manifest some friends."


On the topic itself: I've gone through all these arguments (and a bunch more) in great detail and have come out the other side. And on the other side, the words and arguments simply don't matter. I am very much with Wiittgenstein on the subject. Most of what passes for metaphysical philosophy is simply word games, doublespeak and bullshit.

I try to keep things simple. And clear. And real. And I rarely trust anyone or any institution to provide that clarity for me.
Everybody's in their own little helicopter of perception circling (what their faulty radar indicates might be) truth, from a thousand feet through smudged goggles in heavy cloud cover. And an institution (like The Media for instance) is just a place where a bunch of helicopters hover under the same tax sheild.

Truth is a weasel word. THE weasel word, to my mind, meaning anything from Fact to Belief. Truth is a word that has led many many lives astray. As far as I'm concerned, as a word, Truth should be entirely restricted to the realms of math and science. The belief in the existence of an Existential Truth is both a faith and a chimera, and is purely a confusion of language. A pointlessexcercise in epistemology as an escape from life. (Not that reality doesn't exist, but that the word "existential" is just as slippery a word as truth. Useless, misleading and ultimately destructive to mental clarity. The proper understaning of life, is leading it. There is no conceptual understanding of life. No icon or word or paragraph apprehends the reality of life. That is all just the use of language as a talisman against reality, and the fear, wonder, and
awe thereof.)

I think the past century's phenomenal success in bringing Scientific Theory to bear on reality, has completely routed most philosophical systems from the halls of serious thought. That includes, to my mind, most political theories, most art theories, all social theories, religions, spiritual movements, and on and on, up to and including all the pseudo-scientific horsehockey about free-will arising from quantum uncertainties, (The secret rationale of "The Secret" no doubt). The last gasp of philsophical sense, to my mind, came from Popper, who's idea about Falsifiability is all that needs to be said concerning rational discussions about religion and spirituality, pseudo science, and the like. Popper saw the writing on the wall. Philosophy is dead. Long live a moral and effective Science.

Turns out the philosophy of people who don't think about philosophy (the only people who are trustworthy on the subject, in my opinion) tends to be a admixture of the three philosophies listed above. (they live it though, they don't think it) Slightly less "Categorical Imperative" than "Hedonistic Calculus", with an eye towards learning from the past, without living in it. Some
plans for the future, with the best possible moment to moment living manageable. God, if it works to get you through the night. If not, not. You stick your foot in and shake it all about. And that's what its all about.

On some of your other points:

The following phrase relates to a lot of the content of your email is:
The Realist Position has No Vision.

On language leading the linguist:
Yes, I agree that how one characterizes reality often influences how one thinks about it, and subsequently how one acts in it and responds to it. That is why clarity of thought is so important. And clarity of thought can only stem from clarity of perception. Which is why language should be viewed with great suspicion, because it often gets in the way of accurate perception. Language is mostly a selling tool.

The anthropic principal is only relevant at micro and macroscopic scales, quanta and cosmology. It is a question in science because there are limits to the degree of falsifiability possible at the horizon limits of perception.

Since science has an aura of integrity, the anthropic principal, a very scientificky kinda phrase which has recently dipped its toe in the pretentious wing of the mainstream, will be improperly applied to life-size matters by pretenders and salesmen, who, as usual, are trying to sell you something.

This is not to say that intellectual constructs such as presented in "The Secret" are not fun or useful. Just that all the baroque language being funneled into the matter is an act of dishonesty, cluelessness or both. "Have a vision and work toward it step by step," is all that need be said. Nothing mystical or metaphysical about it. No extra words required. No footnotes. No references to the arcane or esoteric. To Gurdieff or Kant or Einstein or Carnegie or Elmo.

This is also not to say that the universe isn't made up of vibrating energy threads tangling into matter. But that view is through a different looking glass than our eyes. And our eyes are what get us through the day.

The act of thinking about the process of acting, is in fact the main impediment to acting. The solution to the inability to act is to act. If fear of consequence is the problem, the response is, "The only thing we have to fear, is fear itself". (Unless you're allergic to peanuts, in which case you should fear peanuts. But you know what I mean).

These are not circular arguments. Because they are not arguments. Arguments assume absolute truth at the end of the linguistic journey. These phrases are exhortations. Exhortations are calls to make truth yourself. Thinking about acting is the circular thing, unless one breaks the circle and acts. (Which would make the circle a spiral, natch?)

I am all for Pre-Visualization. But in a step by step by step way. Not in the "Be-the-ball" kind of way, which is just nonsense. To pre-visualize means just what it says.

And of course true pre-visualization takes serious brain power and knowledge of the world. Otherwise we're just talking basic daydreaming, which is really what most people do when the have the time.

But daydreaming to me is a nicer past-time than the vast amount of time some folk spend "seeking" truth. Watching a seeker seek is like watching a dog with mange scratch himself to death.

"The Seeker" quickly becomes over-trained in the act of seeking, and then seeking itself becomes the point, possibly subconsciously, of their life. There's a longing for transcendance (caused however) that leads down all sorts of nonsensical roads (Though the solace found therein may be real) and down into all sorts of texts that fail the simplest Wittgensteinian Bullshit protocols.

And then that longing for transcendance leads to considerations of epistemology, which I consider a hugely problematic field of thought that leads nowhere except to a shorter lifespan through wasted time.

Its that damn weasel word Truth again, getting folks all worked up. As a wise man said, truth is at the end of a circle. (Mr. Hubbard of the Roycrofters, I believe)

I think the only metaphysics worth a damn is the workings of the imagination.

And it takes a manipulation of physics to make the imagination concrete.

Which leads us back to science. Or, dare I say it, Art.

http://www.extrememedium.com/kev/Quasi-essays.html
Posted by McW at 8:29 AM 3 comments: 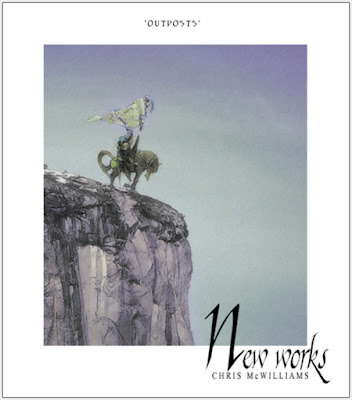 Thanks for all the support and positive feedback on the New Directions exhibition at Barrett House -- check Kathaleen Murray's write-up in the October arts column of the Poughkeepsie Journal for details.